One of the fun things that has happened over the last few months has been coming up with a race schedule for the 2014 season.  I could go on and on about why these events and not others, but you probably wouldn’t care nearly as much as I do.  So here’s my schedule for 2014 and a brief word about each (I couldn’t resist):

April 25 – Cheyenne Mountain Trail Race, 25K – This is the 4th edition of the race directed by my friend Andrea at Epic Endurance Events.  I volunteered at the first one, but have missed the last two.  I’m excited to support Andrea/Epic by actually competing this year.  I fully expect to get my a$$ handed to me by legit trail runners, but oh well.  It may be ugly but not as ugly as if I’d gone for the 50K.

May 2&3 – 18hrs of Fruita – Relax, its a relay!  There will be eight of us.  But it is on dirt!  Oh YES, I bought a mountain bike this winter.  This will be a recurring theme in 2014, just wait.  We had a great time in Fruita last spring with friends and I’m expecting nothing less this year. 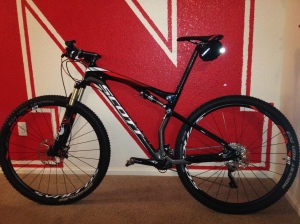 May 18th – Rev3 Knoxville AG Championships – I really want to come out of the gate strong with this one.  I qualified in a pretty good position and hope to back it up.  I’m just hoping its a little dryer than last year.

May 31st – Xterra Lory – Returning to the scene of my second triathlon ever.  With a much better bike.  I’m told its a beginner friendly mt bike course.  Last time I survived the same course on a 13 YO mt bike with no suspension and toe cages.  Hope this is just what I need to get my feet wet/muddy.

June 7th – Boulder Sunrise – Just trying to fill in an early season racing block without traveling too far.  I haven’t raced in Colorado much the last two years and this fits in nicely with my wife’s Ride the Rockies departure from Boulder the same day.  She’s riding 473 miles in 7 days and raising funds for the Davis Phinney Foundation.  If you’d like to make a donation click here.

June 21 – Xterra Curt Gowdy – Scares me to death!  Every time I say ‘Curt Gowdy’ to mountain bikers around here, they get this ‘are you serious, rookie?’ look on their face.  I hope to spend a few weekends their in advance, because…

July 12 – Rev3 Adventure Cowboy Tough Sprint Adventure Race – Also in Curt Gowdy State Park!  A ‘beginner’ adventure race.  If anyone wants to join me, I’d be happy to enter the team competition rather than solo.  I also might follow this up with a Rev3 Cowboy Tough Mt Bike race in Glendo, WY July 13th.

July 19th – Rev3 Adventure Casper Strong – Not a beginner race and also scary!  More on my affinity for these Rev3 Wyoming Adventure races in a another post.

September 7th – Rev3 Cedar Point 140.6 – I have some unfinished business here. I’m hoping it will end up like this unfinished business.  Despite everything you’ve seen above, I still really want to improve at this distance.  This will be the focus of my training after Knoxville.  Along with not injuring myself on the dirt.

I’m undecided after that, but probably one or two of Rev3 Anderson, Ixtapa, or Florida.  Right now, I’m way under my vacation-day budget and leaning toward warm beaches.

Professional engineer, passionate triathlete, once a runner always a runner, Husker fanatic but CO is the place to be!
View all posts by acbeeson →
This entry was posted in Uncategorized. Bookmark the permalink.